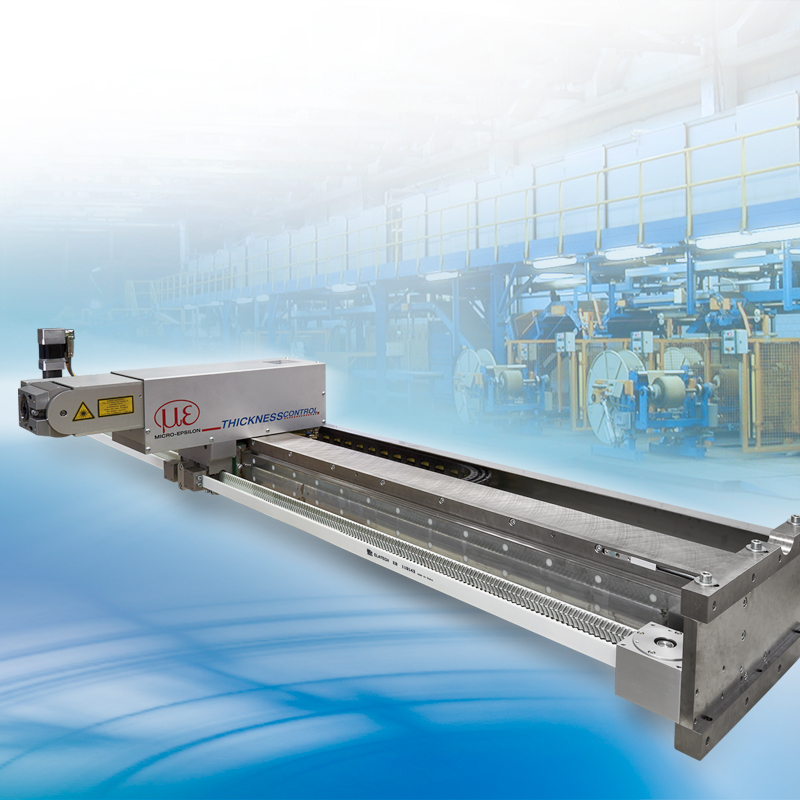 In the preparation area of the tire production, the textile or steel cord is rubber-coated on both sides using 4-roll calenders. These components provide the tire with sustainability and driving stability. The cord is coated by compressing it with a rubber on the top and the bottom side in the roller gap. Adjusting the distance of the rollers also controls the thickness of the resulting material and the crowning or wedge shape. One of the major dimensions in the calender process is the thickness, which is the decisive factor in the functioning of the product.

Based on the combination of two different sensor technologies in one sensor head, Micro-Epsilon has developed the thicknessCONTROL TCP 8303.ET, an innovative system for thickness measurements directly in the calender system. An inductive eddyNCDT sensor based on eddy currents determines the distance from the surface of the calender roll to high accuracy. An optical laser triangulation sensor measures the distance from the surface of the rubber web. The difference between the two measurement values enables the calculation of the thickness of the rubber web.

The eddy current sensor is used to determine the distance from the sensor to the roll, as it measures through the rubber. This is possible because only metallic objects can be measured using the eddy current sensor. Therefore, rubber does not influence the measurement signal. The distance from the surface of the rubber web is determined using a laser triangulation sensor, which is equipped with the so-called A-RTSC (Advanced Real-Time-Surface-Compensation) feature. This real-time surface compensation feature dynamically controls the light intensity of the sensor during measurements, while ensuring optimal measurement results even on dark surfaces such as black rubber. The sensor head is integrated into a mechanical system, which ensures constant distance between the sensor head and the surface of the calender roll. It also controls the angle of attack depending on the process-relevant adjustment of the roll.